By Cliff Woods, with photos by Christine Murphy

The EOVC Air Force 17U Girls team headed to sprawling RIM Park in Waterloo for the 2017 Ontario Volleyball Association Ontario Championships on the  March 31st weekend.  After 3 days and 9 matches of hard-fought competition, our girls flew home with Division 3/Tier 2 Gold medals adorning their EOVC jerseys!

After pool and re-pool play on Friday and Saturday, the Air Force girls were ready to put everything on the line in the playoff round on Sunday, April 2nd.  In their quarter final match, EOVC was up against Milton Edge from Milton. The Air Force girls won in straight sets (25-23, 25-16).

The win put the team in the gold medal match against North Bay YVC. With confidence on their side, EOVC won the match in 2 straight games (25-13, 25-19), capping off a long and successful weekend!

It goes without saying that the Club is extremely proud of how the girls competed, carried themselves, and gave their all over a busy and taxing weekend. You have proven yourselves to be wonderful ambassadors for the club and should be proud of all that you have accomplished during the season. This gold medal at Provincials will go a long way towards helping promote the club in the coming years to potential athletes in our region.

By Cliff Woods, with photos by Maryanne Ambroziak

The 2015-2016 OVA season for the EOVC Air Force 16U girls team came to a heartbreaking end this past Sunday in Waterloo, losing a tough match in three sets to LVC Fire from London. The girls deserved a better fate as they left everything they had on the court.

The growth of this group of young athletes has been phenomenal. Starting way back in October this group was relatively new to club volleyball. Some had played the previous season, albeit not as starters. They all worked extremely hard to develop their skills and passion for the game. Each tournament they were a little better and more poised. Their talents were starting to show and leaders started to emerge.

This past weekend at the 16U Ontario Championships these players impressed the hell out this old coach. They played with toughness and grit. They were never really out of any match and really did deserve to have a better record.  They seemed to finally understand they could play this game and they could also be winners.

As the coach of these girls, this transformation is the thing I am most proud of. They still had those “what’s going on” moments, but those “Wow, these girls are really good” moments were much more evident.

Everyone contributed to the success of the weekend. No, it was not a championship medal weekend, but it was a “we will be back next year and you better watch out” weekend.

It was a true pleasure and an honour to coach these girls and to see the growth in them physically and mentally. I look forward next season to do it all over again.

I would like to thank Kristen Drouin for helping as an assistant coach this season. Her knowledge and passion for the game really helped these girls this year. I would like to thank Maryanne Ambroziak for arranging our accommodations for the weekend and acting as one of our team photographers. Thank you to Rachel Code for also taking and posting pictures from the weekend. And lastly a big thank you to all of the parents for your support of your daughters. You get them to practices and tournaments, you are there to cheer, to support and to be the shoulder to cry on. As I always say, without you we don’t get to do this. 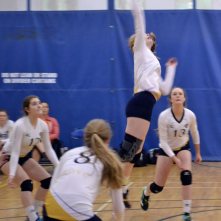 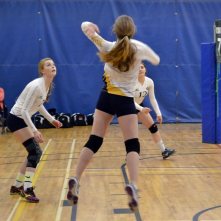 According to Coach Cliff…

The 2015-2016 edition of the Eastern Ontario Volleyball Club’s 17U Air Force team concluded their season on a snowy Sunday morning at RIM Park in Waterloo with a hard fought loss to our arch nemesis Vikings from Cornwall. The loss sent the team home after a very good performance at the OVA’s Ontario Championships.

As coach of this wonderful group of athletes, it was difficult to see the season end this way. These girls deserved a much better fate this season then they finished with.  They worked very hard all season to hone their skills but unfortunately all of the hard work did not translate into wins. However, it was a very successful season in the growth of this group of players. All of these wonderful young women played to the best of their abilities and with determination and passion. They represented themselves, their parents, and the EOVC in a positive manner.

You should be proud of what you accomplished this year. It was once again an honour and a privilege to coach you this season.

A huge thank you to Laura, my assistant coach, for all the work and time spent with this group this year. You should be proud of what you did for these girls.

A big thank you to all the parents for your continued support of your daughters. You should be proud of these young ladies as they can do amazing things.

I look forward to whatever the 2016-2017 OVA season brings. Some of you will be back, some will move on to the next journey in your life. Whatever you do, I wish you the best of luck. I have enjoyed the time I have spent with you and I hope that I have given you the passion to play this wonderful game for many years to come.

According to Coach Laura…

As the girls know, because I have said it so many times before, it wasn’t so much the technical or scores that made my year but more the times on and off the court and all the quirky moments in between. You guys were a pleasure to coach and a pleasure to get to know off the court. Always ready for a giggle, but always eager to learn more as well.

In regards to our results – no, we didn’t end how we wanted to this year, but as Cliff has said, these girls grew so much this year in other ways. I saw each and every one of them grow as players, as friends, and as competitors. At times I wasn’t sure if there was an aggressive bone in their bodies, but boy did they prove me wrong. Girls flying across the back court to save a ball in defence, a middle throwing out a clean kill from 3, our setters putting the ball where it needed to be – no matter how difficult that pass may have been… all of that has come from the effort you girls have put into this season. So congratulate yourselves on that.

Sometimes you may have felt unnoticed in your efforts on the court, but I want you to know I noticed, Cliff noticed and each and every time it happened it made us proud. You guys took what we gave you and asked of you and delivered in the best way you could and that’s all we could have asked for – all I could have asked for. Thank you for that. Thank you for being patient with me, for listening to me, and for seeking out my advice when you needed it.

Thank you so much to all of the parents for the time and support you have shown throughout the season. We really wouldn’t be able to do it without you. Thank you so much to Cliff for running the show this year and for letting me butt in every once in awhile with my ‘two cents’. You put so much into the year and I really appreciate everything you’ve done.

Last but not least, I want to thank my parents. Without them I really wouldn’t have been able to be a part of this season or this club. Their support is never unnoticed. Enjoy your summers and I’ll see you around!